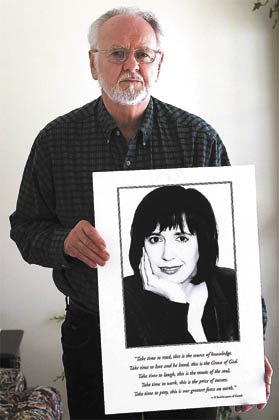 'When I put my daughter on an airplane, we all stood there and hugged and kissed and said goodbye and she walked down and went on an airplane. That's the last time I saw her standing. The next time I saw my daughter ... was coming out from a warehouse on a fork truck in a big wooden crate. No American flag on it.' - Richard Phillips, holding a poster of his murdered daughter, Karen Photo: Rick McKay Cox News Service


Read and comment on this story from the Dayton Daily News about Gabon Peace Corps Volunteer Karen Phillips who was found in the weeds about 100 yards from her home the morning of December 17, 1998. She had been stabbed in the eye and was left naked, clutching her underwear.

It was the first time a volunteer had been murdered in the agency’s approximately 34 years in this lush, French-speaking country in central Africa. A botched investigation, involving an eccentric former rock star in Gabon, may have all but assured that her killer will never be found.

Since the early 1990s, female volunteers repeatedly warned the Peace Corps about security problems in the city of Oyem and other areas throughout Gabon. "They've had trouble long before my daughter was sent there," said her father, Richard Phillips of Windber, Pa. "Then they put my daughter in a house down there by herself."

* This link was active on the date it was posted. PCOL is not responsible for broken links which may have changed.

OYEM, Gabon | Karen Phillips had taken the dirt road that ran from the main street to her house countless times in her eight months as a Peace Corps volunteer.

She was not afraid to walk there alone after dark.

It was about 200 yards up a slight hill. Past an old pickup truck. Past the home of her friend and landlord. Past thick brush filled with palm trees and weeds more than 8 feet tall.

Phillips, 37, traveled this way daily to teach farmers about marketing or to give children guitar lessons. So on the night of Dec. 16, 1998, Phillips told her friends to go ahead without her.

The next morning, a young girl discovered Phillips’ body in the weeds about 100 yards from her home. She had been stabbed in the eye and was left naked, clutching her underwear.

It was the first time a volunteer had been murdered in the agency’s approximately 34 years in this lush, French-speaking country in central Africa. A botched investigation, involving an eccentric former rock star in Gabon, may have all but assured that her killer will never be found.

"They've had trouble long before my daughter was sent there," said her father, Richard Phillips of Windber, Pa. "Then they put my daughter in a house down there by herself."

Since the early 1990s, female volunteers repeatedly warned the Peace Corps about security problems in the city of Oyem and other areas throughout Gabon.

After she was robbed and harassed at her job in Oyem in 1991, volunteer Liz Schuler said she advised the Peace Corps not to place women alone in Oyem because of the danger.

After a man threatened to rape Cheryl Bowdre outside the town of LamberŽnŽ in 1993, she told officials that no woman should be posted alone anywhere in Gabon, where local women rarely live by themselves.

"We need to follow that culture," said Bowdre, 34, of Madison, Wis. "I mean, you are just a sitting target."

Volunteer Denise Ramp said men repeatedly tried to break into her home in Mouila and eventually broke down the door with Ramp inside. Although the Peace Corps finally moved her to safer housing, she said in general the staff ignored complaints from female volunteers or took only minor action.

Ramp and other volunteers said they were unable to get bars on their windows because the Peace Corps would only pay for securing one room.

"We were like, ‘That’s ridiculous. We’re safe in this one room, but then how do we get out?’ But that’s all they were willing" to do, she said.

Other volunteers complained of harassment, threats and break-ins before Phillips arrived in Oyem.

The Peace Corps, in a written statement, said "safety and security concerns expressed by volunteers regarding their sites are addressed as soon as they are reported."

Officials said volunteers are safest when accepted by the community they live in. "Pairing volunteers or having more than one volunteer in a village is not necessarily safer," the statement says.

"At one point she told me how (her Gabonese boyfriend) had asked her not to walk alone at night," said Inger Christensen, one of her closest friends there. "She said, ‘You know I’m not afraid of anybody. I can’t walk around here being afraid of everybody. Nothing is going to happen to me.’ ”

SERVICE PLAYED TO HER SENSE OF ADVENTURE

Karen Phillips had always been adventurous. She entered Villanova University at age 16, then left a 10-year banking career in Manhattan to raise money for CARE, the Atlanta-based global anti-poverty organization.

That sense of daring — combined with a passionate benevolence — took her to Gabon.

But it would not bring her home.

In Oyem, an agricultural town and Peace Corps training hub, Phillips tried to help farmers to better market their produce, and taught English at a local school.

"Just 9 months ago I left PA feeling unsure about my decision. Now I couldn’t imagine what my life would be like without this invaluable experience," she wrote on Dec. 12, 1998, in her last letter to her family in Pennsylvania.

"Africans are kind, intelligent, amusing and warm people who are taking very good care of your Sister here in Gabon. Merry Christmas and Happy New Year. Ma dzing wah! (I love you all)."

Like most volunteers in Gabon, Phillips stood out in the all-black community. She was white, almost 6 feet tall. Fellow volunteers said the brown-eyed brunette was caring and friendly, yet private, especially with other Americans. Occasionally other volunteers would stay with her in her four-room home, which previously had been a "transit house" where volunteers stayed while passing through the region. 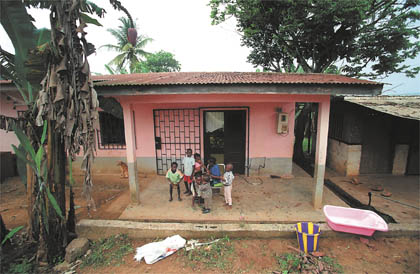 Children play on the porch of the house where Karen Phillips lived in Oyem, Gabon. The Peace Corps volunteer was killed in 1998, her body left in a grassy area not far from the house Photo: Chris Stewart Dayton Daily News

Phillips, like some other volunteers, preferred to live alone, and she embraced the local culture and language. She dated a Gabonese man. She often welcomed children and neighbors for meals in her home, which was painted with silhouettes of people playing music and dancing. She kept a garden planted by previous volunteers that the Gabonese family living there now still harvests. A concrete wall surrounded the home. A metal gate could be padlocked shut.

Still, there were signs all was not well.

Phillips’ house was robbed about two weeks before she died, her family said. And friends said her boyfriend, Mba Eyi Mathurin, beat her.

Christensen and Joel Holzman, two of her closest friends in Gabon, said Phillips showed them bruises on her back and legs. Christensen said Phillips begged her not to tell the Peace Corps, which might have sent her home. Just weeks before her murder, Phillips broke off the relationship because of abuse, they and others said.

Mathurin, in an interview with the Dayton Daily News, denied ever striking Phillips, even though he admitted in statements to police that he had slapped her. He said they had broken up because his wife from an arranged marriage was coming to Oyem.

Mathurin displayed birth certificates for the two children he and his wife had after the Peace Corps volunteer’s death. The names listed on the certificates are "Karin" and "Phillips."

Michael O'Neill, former head of security for the Peace Corps, said the agency knew of Phillips' abusive relationship and planned to move her from Oyem.

Holzman and Richard Phillips said that on Dec. 16, 1998, the day before Karen died, Peace Corps officials visiting Oyem because of a volunteer swearing-in ceremony talked to her about her problems.

Karen, her father said, convinced them she would be OK.

Karen and volunteers Stacy Jupiter and Lynne Kraskouskas had just been to the swearing-in party on Dec. 16 when they stopped at a small bar near Phillips’ house.

As the three sipped beer and ate Chips Ahoy! cookies, a drunken man approached the women saying he was Phillips’ neighbor. Phillips brushed off his advances, Kraskouskas and Jupiter later told police.

The volunteers left the bar and parted ways at a nearby corner about midnight. Jupiter planned to walk Kraskouskas, a new volunteer, back to a training center in town. Phillips assured the two that she would be fine going home alone.

"I figured I’ve walked the streets of Oyem plenty of times by myself at night and never felt threatened," Jupiter said. "I just said goodbye and Merry Christmas, and that was that."

A young girl on her way to school found Phillips’ body at about 9 a.m. the next morning.

All volunteers were immediately evacuated to Peace Corps headquarters in Libreville 185 miles away. Frank Conlon, the country director, flew back to the United States with Phillips’ body; Peace Corps director Mark Gearen was among those who attended her funeral in Pennsylvania.

Richard Phillips recalled his shock at seeing his daughter’s body unloaded in the cargo area of Philadelphia’s airport.

"When I put my daughter on an airplane, we all stood there and hugged and kissed and said goodbye and she walked down and went on an airplane," he said. "That's the last time I saw her standing. The next time I saw my daughter . . . was coming out from a warehouse on a fork truck in a big wooden crate. No American flag on it."

"That was the most traumatic thing you would imagine."

Richard Phillips immediately began pushing for the FBI to get involved with her case. He made calls and wrote to President Clinton, the State Department and the FBI, carefully recording his conversations with government officials in a green spiral notebook.

"If the government is going to put our people in there, they should have something set up that if something does happen to these people, they have the right to come in and find out what the hell went on," he said.

Phillips worried that no one would be held responsible for his daughter’s death.

His fears would come true.

This story has been posted in the following forums: : Headlines; Safety and Security of Volunteers; Investigative Journalism; COS - Gabon